You can’t help but think, “I’m going to do this. However, don’t forget that because it’s an anime, you don’t need live-action vehicles, weapons, character movements, or locations to set the stage in a place you like.

The characters are fascinating

He is the leader of the secret society “Pig no Hizume”. He has a bald head and glasses, and wears a sober outfit for the boss of a huge organization of evil.

You are the boss of an enemy that wants to dominate the world called Mouse by cyber terrorism.

As you can see, Steve Jobs is the model. 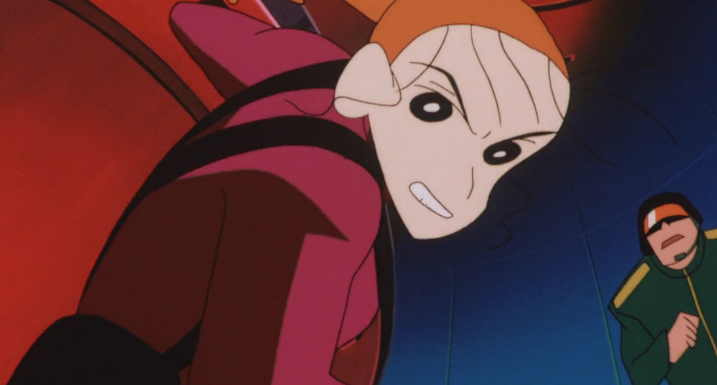 “Oshiki” is a code name and his real name is unknown. A female SML agent dressed only in a thin fabric bodysuit. In the beginning of the story, she stole the disk containing the password to activate the secret weapon from the pig, Hisume’s headquarters, and escaped to the houseboat on which the kindergarteners were riding. Later, however, she is captured on a houseboat by a flying pig, Hidume, who follows her, and is captured along with Shinnosuke and the others who are late escaping.

“Muscle” is a code name, real name unknown, an agent of the SML. A large, muscularly built man. She comes to Hiroshi and Misae to find out information about Shinnosuke, and while she indulges in Hiroshi’s and Misae’s schemes, she begins to share her actions with them.

Dr. Obukuro is an old man who graduated from the University of Tokyo, Massachusetts Institute of Technology, and New York Institute of Technology and is an authority on electronics. He is the developer of the computer virus “Buri Buri Saemon”, and when he lived in Kasukabe, he invented the program after seeing Shinnosuke’s graffiti that Misae threw out the window. After that, she and her assistant Angela Aume were captured by “The Pig’s Hisume,” but in reality, she was helping “The Pig’s Hisume” out of her own personal desire to accomplish her own research. He considers slippers to be mankind’s greatest invention, and he wears them everywhere he goes. I have an ass fetish and have no interest in a woman’s body other than her ass.

Angela Aume is Dr. Obukuro’s assistant. She is a middle-aged onee and says she turned onee at the age of 12. The outline of his face looks a lot like Shinnosuke’s, and he even mentions it in the play.

There were three other enemy cadres, each with a strong gun, knife, and fighting specialist.

It’s also cool that Koichi Yamadera plays one of the enemies.

This is a work that keeps the usual gags of the okama characters well under control.

Also, the enemies are serious.

There is an intense depiction of guns, knives and violence, and it’s pretty serious about killing.

It may be similar to “Die Hard 4.0” in that it’s a serious cyber-terrorism attempt.

And the last part of the film…

I was so moved by it that I cried.

The artworks are amazing.

The gunfights and fights are realistic, and the film features realistic action scenes. All of the firearms that appear in the movie are real, and even the way the muzzle flashes come out and the number of rounds fired when shooting are detailed and illustrated in the drawing book. In an interview on a pamphlet, Hara commented about the film, “I aimed to make an old and nostalgic adventure action film with a theme of flame friendship.

As you can see from the above interview, the white army battles and the weapons used in this work are depicted quite realistically, and if you look closely at the artworks, the movement of the guns when firing is depicted just as well as the live action.

The art of deforming the human body and putting it into the style of Crayon Shin-chan’s work!

If you don’t have a good understanding of the skeleton, the perspective will fall apart, but it’s really amazing that you don’t have that. It’s just like Naruto’s Kishimoto-sensei.

The firearms that appear are as follows.

I liked the theme.

The release was in 1998, around the time Apple came out with the early iMacs.

Good taste in choosing cyber terrorism as a theme in these early days of the information society!

It’s an old-fashioned theme these days, but it was a Japanese anime film back then, wasn’t it?

Furthermore, as I mentioned earlier, the emphasis on firearms and white warfare is excellent.

Towards the end of the story, the virtual world. I mean, VR is going to come out, too.

Also, trying to use AI to cause cyber-terrorism is very advanced.

I highly recommend it! For me, I would like to see a live-action movie in Hollywood.